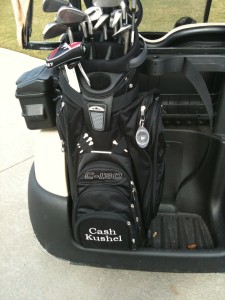 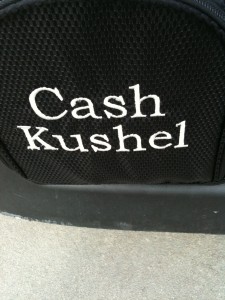 People ask how I got the name Cash?

Its true that my parents proudly listed the name “Paul Kushel” on my birth certificate.

While teaching accounting seminars at financial institutions I was often quoted as saying “Cash is King” and always spoke about the importance of cash flow. At a bank, 28 years ago, a crop of new hires were told by their manager Bruce Jackson as well as by the previous year’s participants that they were about to meet a dynamic professor by the name of “Cash Kushel.” The name caught on and everyone started calling me “Cash.” I loved my new persona and soon began telling the trainees at other banks to do the same. I went so far as to tell them I would not respond to Dr. Kushel or Professor Kushel. “We will get along just fine, if you call me Cash.”

Years ago, Fridays in the summer became designated as “Casual Fridays.” We would all show up on those days sans suits and ties. On those days I would tell my seminar attendees that Cash Kushel was being replaced with a guest lecturer named Caj Kushel. My horrible pun has always received more laughs than groans, which I interpret as a positive.

I tell my classes that life is filled with irony. Of all the women I could have married in this world, I got hitched to a girl named Florence. “I’m Cash and she’s Flo.” My students buy it hook, line and sinker, until I accuse them of being a gullible bunch. I then say “Her real name is Carrie.” I pause for a few seconds, smile and say “Cash and Carry?” Can you imagine trying to teach accounting without humor? By the way, my wonderful wife’s name is actually Ellen. She refuses to change it to Flo, despite my pleas.

Shortly after using the name Cash in my seminars, our third son was born. I strongly suggested we should name him “Cash.” But Ellen pushed for the name Alex. Alex is now the play-by-play announcer for the St. Lucie Mets, the Single A farm team of the New York Mets.

After my unsuccessful attempt in naming our son “Cash,” I decided I would be the one to use the name in a more official capacity. When I introduce myself to people in a social setting, I tend to use the name Cash far more often than Paul.

It has turned into an effective marketing tool. Those I have encountered in seminars remember that a guy named Cash introduced them to the world of banking, accounting and taxation. In addition, the alliteration of the name Cash coupled with my last name, Kushel, (pronounced Kush-shell) works well.

Cash Kushel is the pen name I used when my debut novel Lotto Trouble premiered in 2003, and I have continued its use it in my subsequent novels, The Choosers, Stockhammer and my newest novel being launched by Koehler Books in October of 2013, Sense of Direction.

I even have “Cash Kushel”  stenciled on my golf bag. This causes mass confusion in tournaments when the name Paul is listed on the scorecard. When you viewed the pictures shown above you might have noticed my golf game has a built in alibi. You see I do everything left-handed.

So that is how I got the name Cash.

Thanks for reading my debut blog. I plan on blogging often and will inform you of my schedule once it is set.  You will hear from Cash Kushel the novelist and author, as well as Cash Kushel the educator. I will speak about a myriad of topics. I will even ask some of the characters in my many novels to guest blog from time to time. These fictional characters should have some great things to tell you and will keep you entertained. I hope they will enter your life as they have mine. If you enjoy them half as much as I do, I will be a happy man. Speak to you again, real soon.